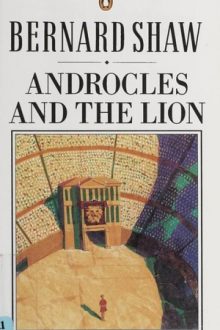 Androcles and the Lion

A short summary of Androcles and The Lion by George Bernard Shaw:
The play is about a slave named Androcles who escapes from his cruel master and takes refuge in a cave.

There, he meets a lion who is also seeking refuge from a storm. Androcles befriends the lion and removes a thorn from its paw.

When Androcles is captured and brought back to his master, the lion recognizes him and lies down at his feet, refusing to hurt him.

As a result, Androcles is saved from being thrown to the lions in the arena. The play ends with a moral about the power of kindness.